Best quality of life outside London

Birmingham is justifiably proud of its history as the origin and hub of the Industrial Revolution (1750-1830), which transformed the previously static agrarian world economy into the modern era of mobility, growth and mass wealth creation.

Today, it is the UK’s second-largest city in population and economy, and still driven by the exceptional creativity and innovation that once earned it the title of ‘the world’s first manufacturing city’.

That drive remains strongly in evidence in ‘Brum’, as it is sometimes affectionately known, where the UK’s biggest-ever urban redevelopment scheme has been in progress for over a decade.

Named the Big City Plan, it is not merely a commercial make-over, but, in effect, a complete redesign of the city centre urban planning. It is transforming what was an essentially working-class metropolis, crammed with factories, workshops and small terraced houses, into a spacious and gleaming centre of business, technology and modern living.

As in most city centres, the use of private cars is being discouraged in Birmingham. Rather, access to the Bull Ring retail complex and other facilities is becoming much more convenient over a transport infrastructure that is being completely redrawn: 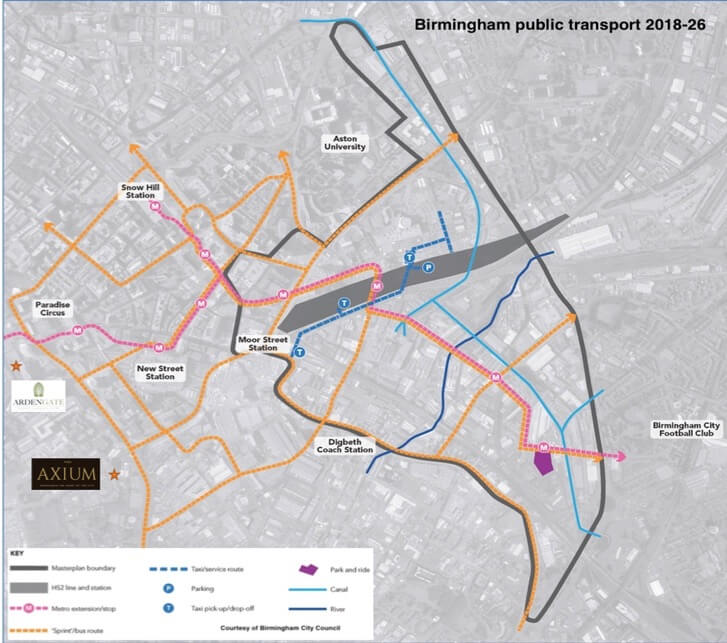 A key element is the planned Sprint bus network, with dedicated traffic lanes. Three routes should open for the Commonwealth Games, to be hosted by Birmingham in 2022. A further three should open by 2026, coinciding with inauguration of a new national high-speed railway, known as HS2, for which the city will be the first terminus.

This integration of the city’s new transport networks with its existing West Midlands Metro tram service is a crucial part of the Big City Plan. The service is being extended throughout the central area, as well as to key neighbourhoods and other regional cities such as Wolverhampton. It is also being linked with the national road and rail systems and the airport.

Perhaps, you hate public transport? Don’t worry. Pedestrian areas and cycling routes are being built or extended throughout the city with secure cycle hubs being installed at all key metro and train stations. 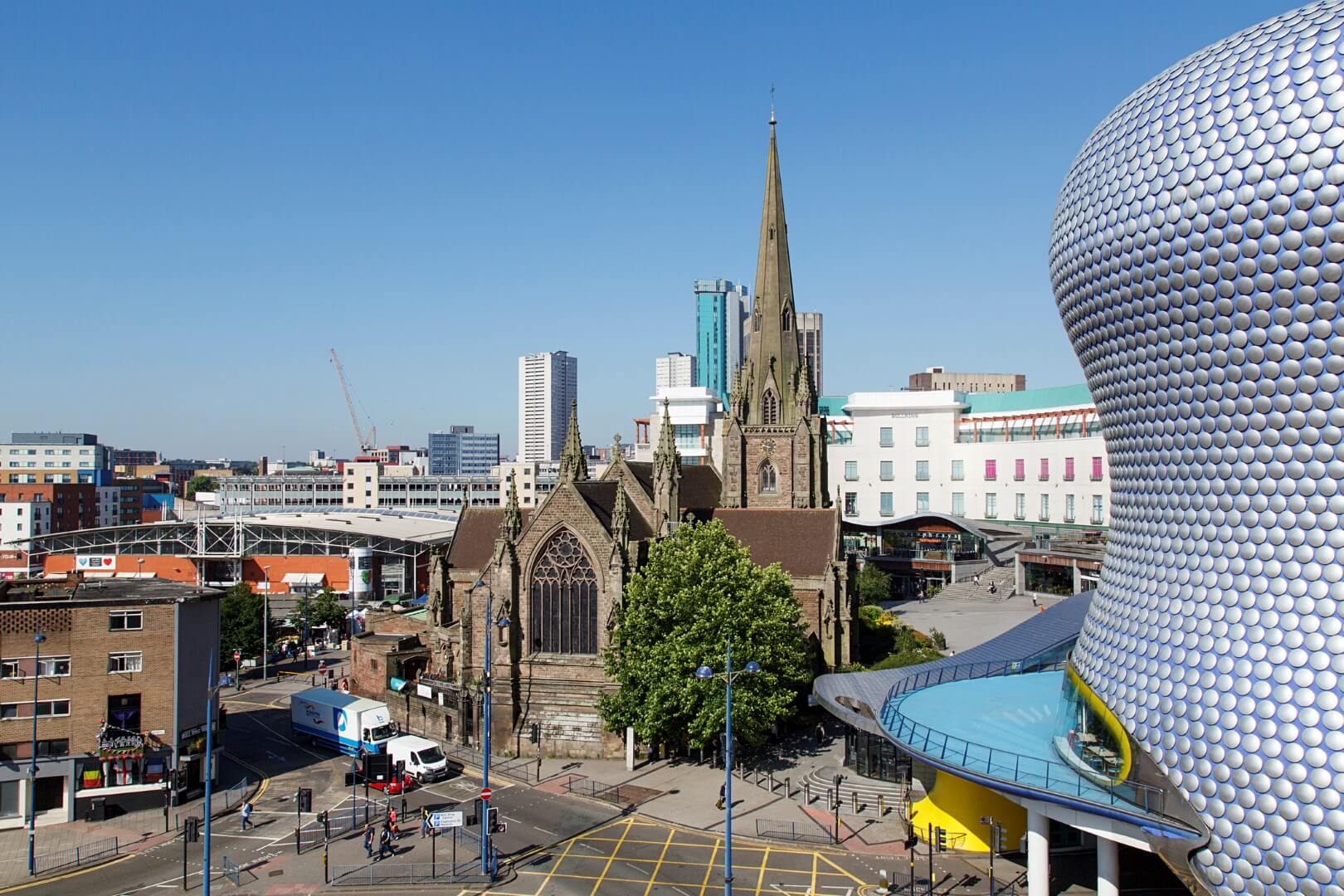 Sited where there has been a market since the Middle Ages, the new Bull Ring development opened in 2003. A pedestrian-only zone, it is now one of the three most popular shopping centres in the UK.

Together with the adjacent Grand Central and Linkstreet malls, it houses over 200 retailers, including famous names such as John Lewis and Selfridges, as well as branches of other large national and international chains. 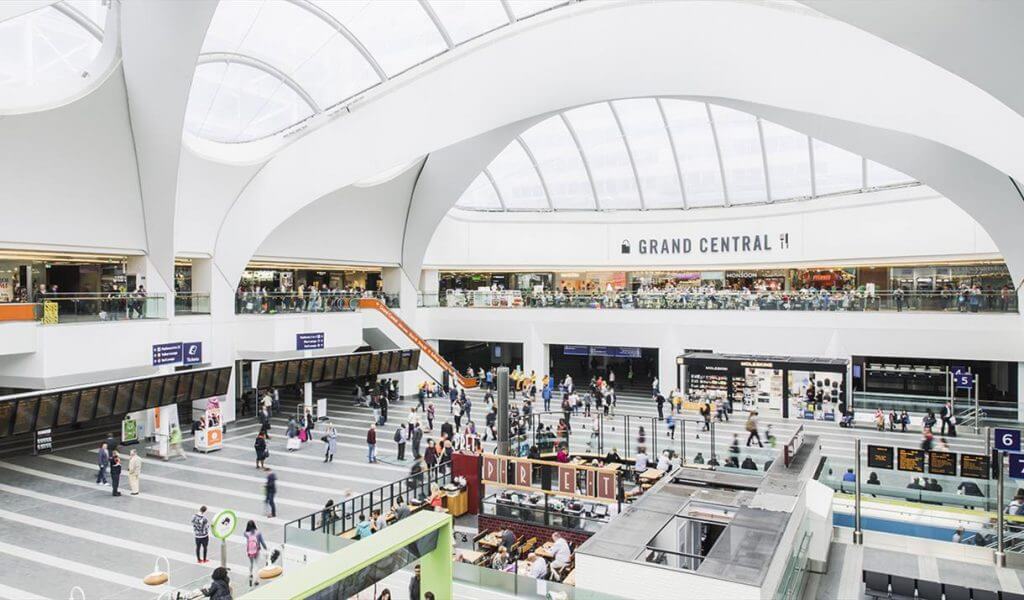 Meanwhile, all around New Street Station, upon which the Bull Ring sits, there is a network of streets and arcades, hosting a wide array of independent shops.

Slightly further away, and adjacent to each other, sit The Cube and The Mailbox, two new centres for fashion retailers, including a branch of the legendary Harvey Nichols. 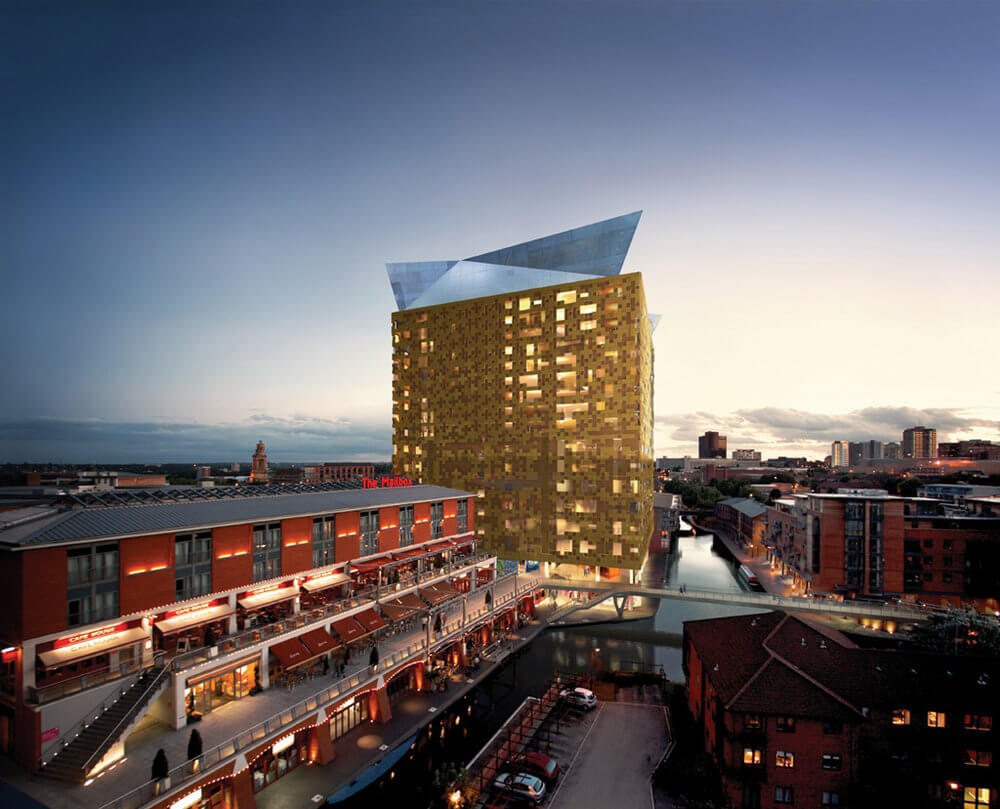 Over the past 40 years, one of the most remarkable developments – in a land of takeaway kebabs, curries, and fish-and-chips – has been the steady growth in demand for good restaurants.

Accordingly, Birmingham’s malls and streets are now homes to a wide variety of restaurants and cafés. Although most are part of well-known chains, such as Carluccio’s, Wagamama, and Café Rouge, the more upmarket diner is also well-served. For example, between them, The Cube and The Mailbox have a number of Brazilian, Japanese, Vietnamese, and other Asian restaurants.

For the truly discerning, Birmingham’s top restaurants have aggregated no fewer than five Michelin stars, more than any other UK city outside London. Some are expensive, such as Purnell’s Bistro, Marco Pierre White’s Steakhouse in The Cube or the Michelin-starred Edmund’s Bistro de Luxe in Brindley Place.

More moderately priced but still excellent are Simpsons, Turner’s at 69, Carters of Moseley, and Adam’s, each with a Michelin star.

Whatever one’s taste in music, Birmingham and neighbouring towns have much to offer. For rock and pop fans, the city was the birthplace of such hallowed groups as Black Sabbath, UB40, Duran Duran, Electric Light Orchestra, The Moody Blues, and Traffic.

The survivors among these idols still perform in the city from time to time. They, and other famous bands, rarely miss coming to the UK’s second-largest city on their tours.

For lovers of classical music, the world-famous City of Birmingham Symphony Orchestra needs no introduction, nor does its home venue of Symphony Hall, regarded, in acoustic terms, as one of the greatest concert halls of the 20th century. 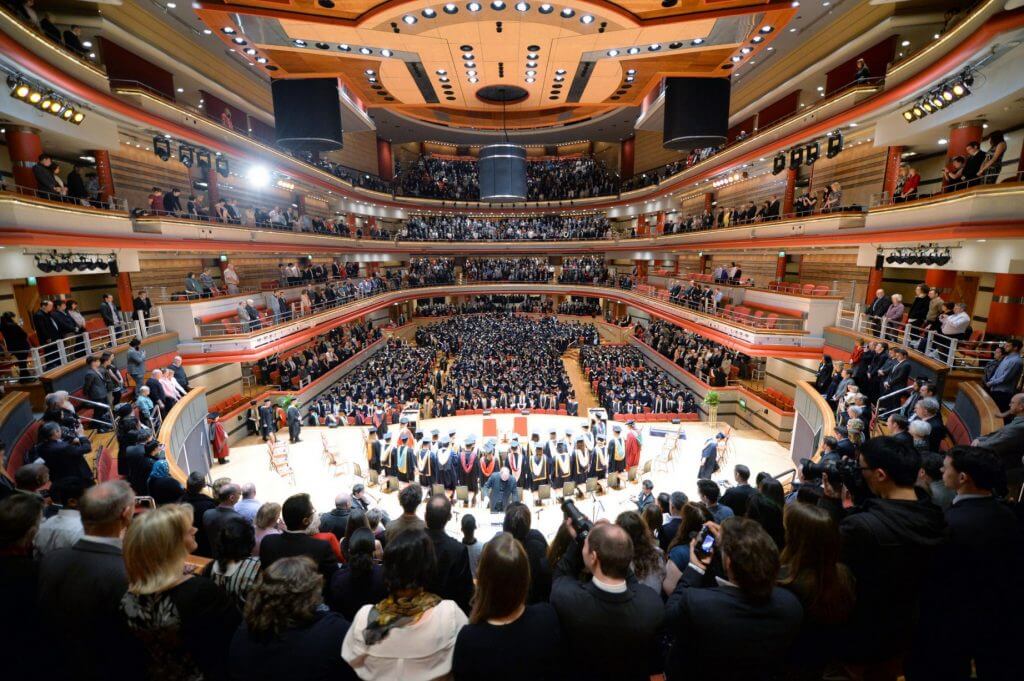 Ballet and opera lovers are also well served by, respectively, the Birmingham Royal Ballet and the Birmingham Opera Company. More esoterically, Ex Cathedra is one of the UK’s oldest and best-regarded ensembles performing early and Baroque music on period instruments.

Birmingham is one of the UK’s greenest cities, with almost a quarter of its metropolitan area devoted to parks, gardens, canal paths, and other open spaces. This is not an accident, but is being actively encouraged and developed under the city’s Green Living Spaces Plan, first published in 2013. 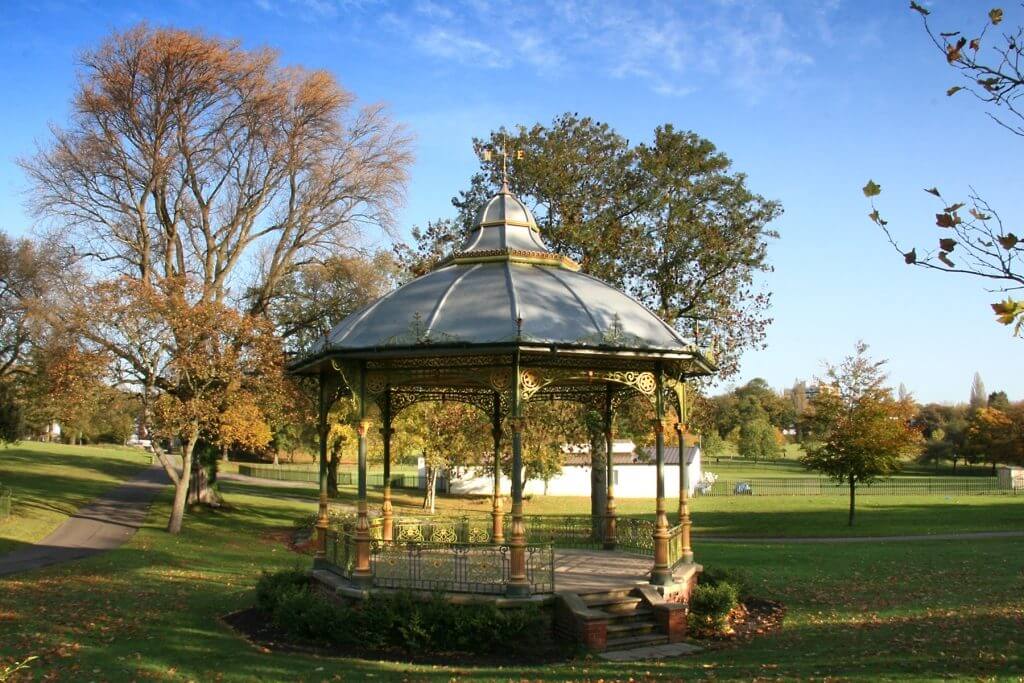 The Plan deals not just with bringing more of the countryside into the city, but also with greenness in the modern sense: energy efficiency, CO2 emissions, clean transport networks, and so forth.

A crucial element in the Plan is the green foundation provided for it by Birmingham’s canals. They are a happy legacy of the Industrial Revolution, when these waterways were built to transport the coal that fuelled it and the manufacturing goods it produced, notably its world renown high quality iron goods. There are over 100 miles of canals in the city, including those that link it with Wolverhampton and other nearby cities – more than in Venice!

Today, they are used mainly for pleasure, carrying owners and renters of their famous ‘narrow boats’ (there’s one in the photograph) all over Birmingham, the West Midlands, and even further, for holidays or trips to sights, pubs and restaurants. 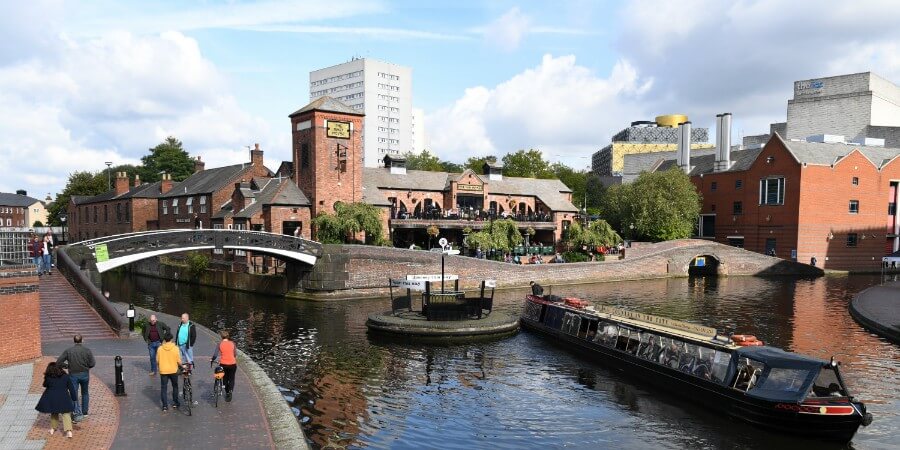 Bearing all of this in mind, it’s little wonder that, in its Quality of Living Report, Mercer, the international consultancy, ranked Birmingham has been ranked as having the highest quality of life of any in the UK outside of London and the number one destination for those leaving the capital.

With privileged access to major transportation hubs, close proximity to the best shopping, entertainment and food experiences, the parks and most famous canals, Arden Gate and The Axium offer the best of what city centre living really means in Birmingham.