Birmingham at your feet

Shakespeare’s comedy, As You Like It, is set in the Forest of Arden. In the 16th century, it stretched across the Midlands, including Birmingham. For Arden Gate, Top Capital Group’s new 225-home development in the city centre, the name signifies happy conjunction of environmental sympathy with easy access to the fast-growing heart of Britain’s second city.

Within 15 minutes’ walk can be found almost any resource that a family or singleton might need for day-to-day living: supermarkets, delicatessens, doctors and hospitals, cinemas, bars, theatres and shops of every kind.

Yet, Arden Gate is no cramped city-centre rabbit warren. The ambience is airy and engaging, more like a suburb. Just one street away is the historic Canal Old Line. You can walk or cycle along its traffic-free towpath, following a picturesque route to the Mailbox, the Cube (both visible in the photograph, below), Grand Central, and the Bull Ring. The last is notable as a pedestrian-only area.

These are all accessible in under 10 minutes on foot and a fraction of that time by cycling. You can pause at a canal-side pub or café on the way. Sipping a coffee or beer while watching traditional narrow-boats putter by, you can turn even the most mundane household shopping trip into a memorable pleasure.

A crucial concern for many families, especially those with young children, is ready access to medical care. In that, Arden Gate is well situated, as the map shows, below. Even Birmingham City Hospital, the most distant of the indicated facilities, is under two miles away. Several need only a short walk. 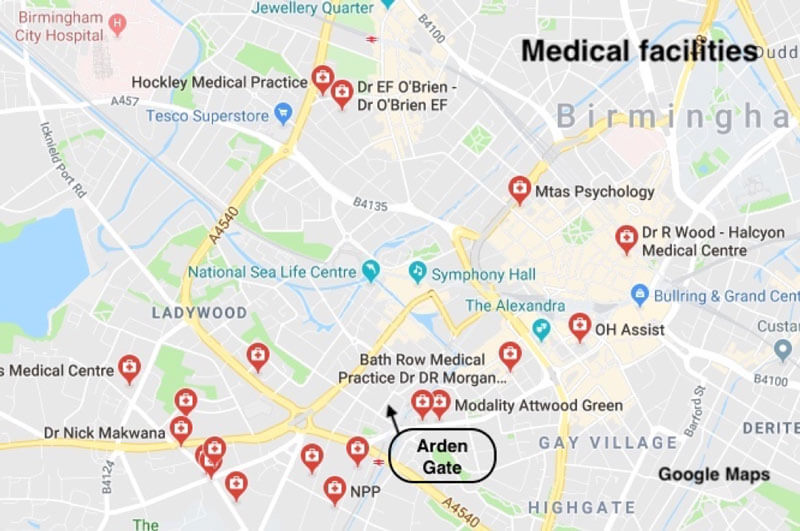 A wide variety of delicatessens, hardware stores and other household suppliers, if not available in local shopping malls, are still within easy reach, even on foot.

Birmingham is one of the UK’s most dynamic cities, drawing people and investment from all over the world. It is a national hub for technology, entertainment, professional and financial services, retailing and education. Arden Gate is within easy reach of these career opportunities.

In particular, Birmingham’s financial services sector has received a major boost from the recent opening of HSBC’s new UK headquarters at 1 Centenary Square following the footsteps of Deutsche Bank’s move of its UK operations to Brindley Place. Both are barely 10 minutes’ walk from Arden Gate and is the city’s new business hub, still being developed and expanded.

Another grade A office development within walking distance from Arden Gate is Axis Square, where construction begins this year and, over the coming years, will add one million square feet of office space for some 10,000 new jobs.

Surpassing even these new facilities is Paradise, a massive development next to Centenary Square and also within easy walking distance of Arden Gate. Work began in 2015 and the first two (of up to 10) new buildings will open in 2019. One is fully leased to PricewaterhouseCoopers, a ‘Big Four’ accountancy firm.

Together, these developments are creating the largest regional business and financial services centre in the UK. Already, greater Birmingham is host to some 23,000 such organisations, employing over 200,000 people. 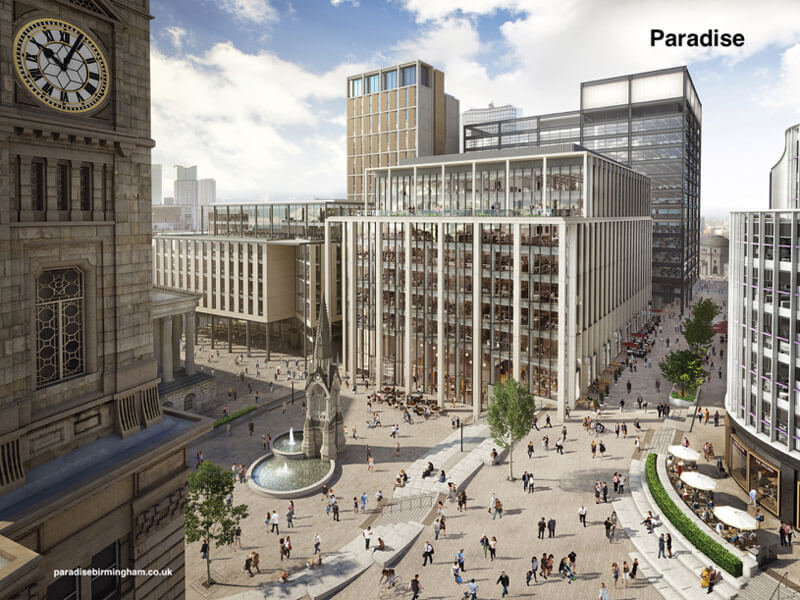 Several of these companies are fintech (financial technology) specialists, emphasising the city’s growing importance as one of the UK’s largest technology hubs, with over 60,000 employees.

Underlining that importance, it is claimed that a quarter of the UK’s digital games workforce is located in the West Midlands region, of which Birmingham is the effective capital.

The retail sector is another growth story, bolstered by new retail malls in the city centre. They accounted for a major proportion of Birmingham’s 2017 total of 41.8 million visitors.

Those visitors need to be transported, fed and housed, thereby also underpinning the city’s employment prospects in transport services, hotels and restaurants.

Above all, these exceptional employment opportunities are not static but continue to grow rapidly. Birmingham has been voted the UK’s top city for start-ups for five years in succession, with over 12,000 new businesses established there in that period.

If your tastes are more expensive, walk a little further to The Cube, where you’ll find Marco Pierre White’s Steakhouse. Or walk north from Arden Gate to Edmund’s Bistro de Luxe in Brindley Place. It’s one of five Michelin-starred restaurants in Birmingham, more than in any UK city outside London.

Between these two locations is the Gas Street Basin, where the junction of two canals provides a picturesque backdrop for a number of gastro-pubs, bars and small restaurants.

For culture, the Hippodrome offers ballet, musicals and other theatrical entertainment and is barely 15 minutes’ walk from Arden Gate. The acoustically-outstanding Symphony Hall, even closer, is home to the acclaimed Birmingham Symphony Orchestra.

It doesn’t stop there. The City Council has designated the 34-acre site of the now-closed wholesale market, Smithfield Market, next to the Bull Ring, for a £1bn redevelopment as a centre for leisure facilities, including independent shops, markets, restaurants, a public space for events and the future ‘Birmingham Eye’, a cantilevered observation wheel.

For walkers, cyclists and those in need of peaceful greenery, almost 25% of metropolitan Birmingham is devoted to parks, gardens, and open spaces. Cannon Hill Park is one of the prettiest and you can cycle there in well under 15 minutes. 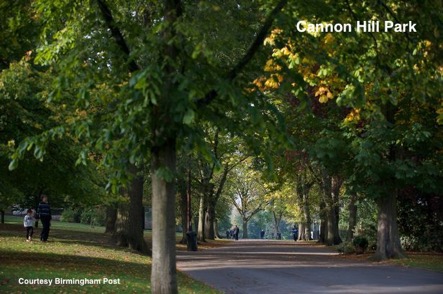 Alternatively, cycle to the picturesque Edgbaston Reservoir, also less than 15 minutes away. Break your ride around the lake to enjoy a picnic by the water. As the map, below, of Birmingham’s cycling paths and lanes shows, some run along roads (yellow and blue lines), but many are for bicycles only (green lines), especially around the reservoir. You can also cycle along most canal towpaths (purple lines). 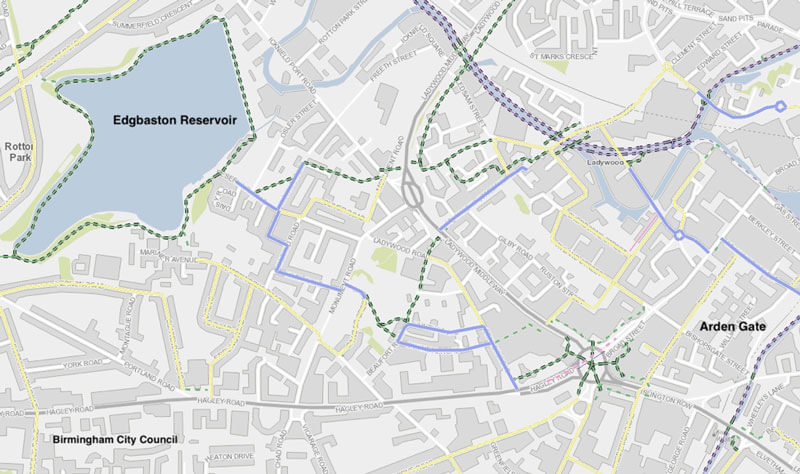 And there is more beyond the city; within less than 45 minutes by car, there is a wealth of sights to see, historic places to visit, and exciting things to do, whether for families, for thrill-seekers (see what it’s like to pilot a Boeing 747 at Flight Simulators Midlands), history buffs or culture hounds. Or just take pot luck and visit places with weird names, such as Weston-under-Lizard and Ashby-de-la-Zouch. 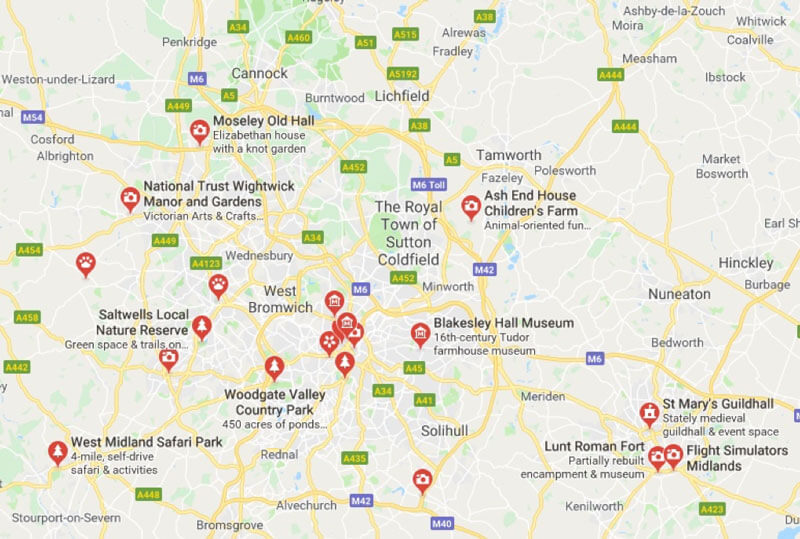 Whether for living, working or playing, Birmingham has something special, even unique, to offer. And it’s all within easy reach of Arden Gate.